This archive contains the practical work, horticultural approaches and techniques, vision and living legacy of a great organic horticulturalist and vitalist, Alan Chadwick. Its purpose is to share his wealth of insights and gifts freely with the world.

In 1977, Alan Chadwick (1909-1980) was called by Small Is Beautiful author E. F. Schumacher, “the finest teacher of intensive horticultural, agricultural methods that I think the world possesses today.” Alan Chadwick was much more than a superb gardener. He was ahead of his time and his time has now arrived.

In his youth and middle age, Alan apprenticed with world class gardeners, horticulturalists and designers in Europe. According to Alan and his family, both he and his brother Seddon were tutored and influenced personally by the creator of Biodynamic Agriculture, Rudolf Steiner. Chadwick’s artistic and cultural background, world travels, theatrical experience and extensive training aided him in creating one of the most prolific, environmentally sensitive, efficient and beautiful horticultural approaches in the world.

Alan visited the West Coast beginning at age 58 in 1967. Over the next 13, years he created garden projects at UCSC in Santa Cruz, Saratoga, Covelo and Green Gulch, California. His final garden project was in the Shenandoah Valley of Virginia.

Alan once said, “In the garden, we are re-investing in simple garden tasks a sense of their true, deep significance.” Alan’s entire gardening approach and his myriad of techniques are artistic craft and hand work, thus using no fossil fuels or machinery.

Chadwick’s intimate approach to Nature has the capacity to build fertile, productive soil up to 60 times faster than natural soil building processes, while other systems are depleting the soil globally 18 to 80 times faster than they are created in Nature.  We know the efficiency of this biologically-intensive approach from a Masters Thesis “Changes in Carbon Content in a Soil Under Intense Cultivation with Organic Amendments” (1983) written by Douglas Maher at the University of California-Berkeley under the mentorship of one of the top soil scientists in the world, Dr. Hans Jenny.

The Alan Chadwick Living Library & Archive is a treasure trove of practical approaches, including the techniques for the culture of vegetables, compost and ley crops, herbs, fruit and flowers, and the husbandry of livestock, including honey bee care; all methods and techniques that Alan wove into a unique horticultural tapestry. The Archive includes Chadwick’s lectures and talks, delineating his practical and truly unique techniques of cultivation, fertilization, irrigation, propagation, nursery procedures, greenhouse and frame work, composting, fertile soil creation, harvesting, tool usage and care, produce storage, seed saving, and plant histories.

The archived wealth of these techniques lends itself perfectly to immediate practical implementation by:

Alan’s vision for the future is critical. The archive includes core Chadwick principles that one finds no where else. An example: he spoke of “Varietal Disintegration”, pointing out that most domesticated plants are growing weaker and weaker in vitality. Hence, humanity needs to reach back into the wild and select seeds of what he termed “wild origin force and strength”, thus creating stronger and healthier cultivars and varieties of most of our domesticated plants, or crossing these “wild origin” seed plants back into our weakened varieties. This is a very practical initiative to benefit the world’s food and medicinal plant productivity and make plants less prone to disease and the vagaries of climate change.

The beauty and simplicity of Chadwick’s entire flexible approach to horticulture is that it can be adapted to address virtually all growing conditions worldwide. Whether in China, Haiti, Russia or Afghanistan, the underlying wise and sound horticultural techniques based on universal scientific principles still apply.
In pre-industrial China, there was a saying that when a great farmer died, an entire living library was lost. The same could be said about Alan Chadwick; but we have not lost his vital legacy. The Alan Chadwick Living Library is a gift of practical approaches to gardeners everywhere and a literal foundation for food raising in this new century and for millennia to come.

In one of Alan’s talks, he noted that a table of contents for a 26-volume work published by the Romans on biologically-intensive horticulture had been found in a cave in North Africa. But that was all that remained of this treasure. At this critical time in history with so many soil, water, climate and population challenges, Alan’s practical heritage must not be lost. 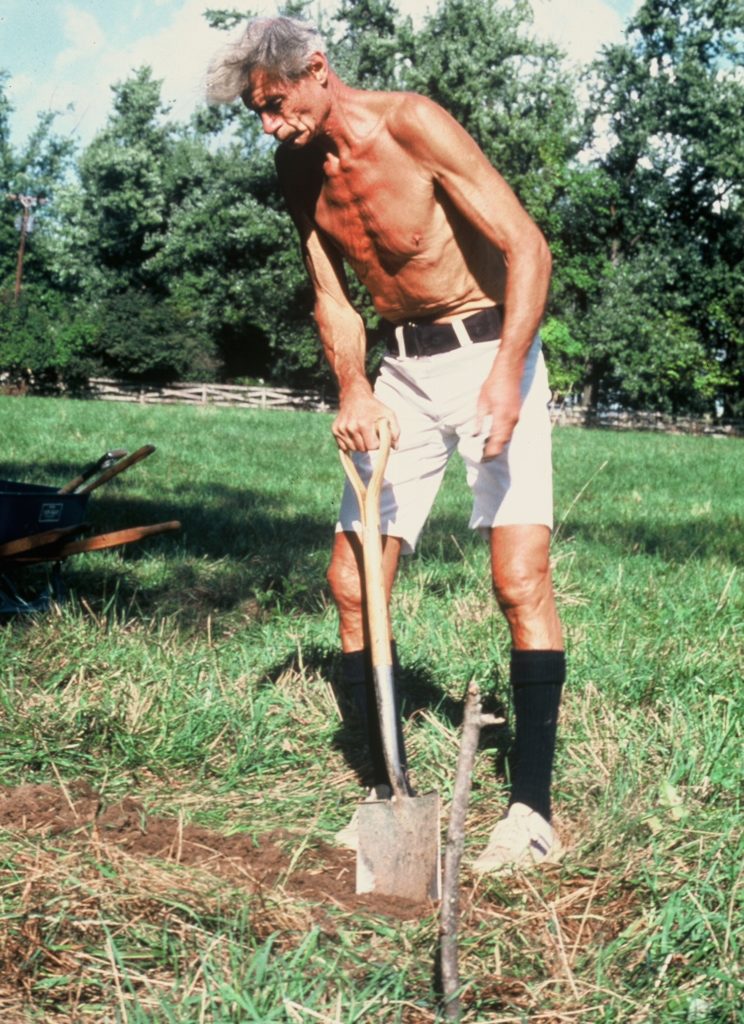