Alan Chadwick returned to Green Gulch in December of 1979, seven years after he first established our gardens here. He was too ill to work any longer in the garden itself, but he was able to give small classes and lectures, several times a week, and talk to individuals.

During this time he asked Baker-roshi to be his heir and literary executor and to see to it that his few possessions were passed on appropriately. He asked that his personal library be kept at Green Gulch and become the basis of a horticultural library. He also asked that Baker-roshi take initial responsibility for establishing a horticultural society to continue his work and teaching. He wanted this society also to help maintain gardens where training of his apprentices could be continued.

Before Alan died he met with many of his senior apprentices, with Baker-roshi, and other students and friends. At this meeting the basic form of the Alan Chadwick Society was worked out. The Society is now incorporated and is working on several projects: collecting the Alan Chadwick Archives to be housed at Green Gulch with his library; establishing the Gardeners’ Guild, a network of apprentices and students of horticulture; collecting his teaching on cassette tapes so they may one day be released and/or transcribed and published [NOTE: The Chadwick Society disbanded in the mid 1980s; the Society’s audio/video tape library and collection of archival materials were given to Craig Siska, now of Verdant Vale Gardens, LLC].

He then died calmly in his own time with Kathleen Acacia Downs, his devoted caretaker and Richard Baker-roshi at his bedside. For the next forty-eight hours friends and apprentices joined him at his bedside, speaking to him, reading psalms and sitting quietly. 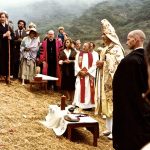