The Garden That Might Have Been … and Still Could Be…

After leaving Covelo, Alan Chadwick was living in Sonoma County just outside Napa, and looking for land for the Garden Project. Lemon Soda Springs was an abandoned resort and water bottling establishment. Alan and a few of his apprentices, friends and supporters, a loose association calling themselves Friends of the Springs, began making efforts to procure the property for the Garden Project. They held meetings and discussed how to proceed. More than a few field trips to the land were embarked upon by Alan and his associates.

At one meeting Alan delivered a vividly descriptive talk describing his vision for the Garden Project at Lemon Soda Springs which was recorded. A transcript survives, included in this section, which provides a deep insight into Alan’s world view.

The Garden was not to be built there, however, as during that time Alan came across a brochure describing a new spiritual community being formed in the Shenandoah Valley, Virginia. At the last Friends of the Springs meeting, Alan announced that he was moving the Garden Project to Virginia. 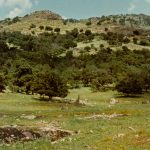